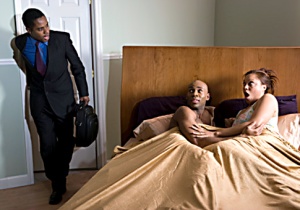 Some years ago before my plunge into journalism, I wanted to be a banker not because I studied the course but I knew that those bankers definitely earn more than most journalists. God answered my prayers and I got this bank job where I was first assigned to understudy an accountant. My job was to punch tellers most of the time. Few months later, it became a very boring job for me. There was nothing exciting, just doing same thing and seeing same faces every day. The entire routine just made life uninteresting. Then I decided I would go back to writing, at least I would be fulfilled than living a dull life punching tellers. Just when I made this decision, Akin was transferred to my department. He was young, intelligent, fun to be with and the toast of most of the female staff; married and unmarried. I imagined that his wife must be privileged to be married to him. He made the job more interesting and I looked forward to be given an assignment with him. It kind of broke my heart later when I discovered that he was unfaithful to his wife. I didn’t understand why this made me feel bad, was I also falling for him?

“Does your wife know about Angela?” I said to him one day as we worked on his computer. Angela was his girlfriend and they didn’t even make it a secret even with the fact that she was also married with two children!

“Why do you ask?” he wasn’t expecting the question and so surprise quickly spread on his face. He looked defeated because I knew he also liked me. “…well she is just my girlfriend and my wife doesn’t have to know about her.”

“What if your wife finds out? Or even her husband…” I didn’t want to believe that this fine man and a supposed responsible father didn’t see anything wrong in sleeping with another man’s wife.

“See my dear, Angela and I are in search of one thing we can’t get from our spouses…FULL satisfaction.” I discovered that Angela was just one of his girlfriends.

As if Akin’s wife was prompted, she came to see Akin that day on her way from picking the children from school. Akin wasn’t informed he had a visitor since it was his wife neither did she bother to knock because she had never done so. What her eyes saw her husband doing to Angela was demonstrated in the way she beat Angela and the commotion she caused at the bank. It was a beating Angela would not forget in a hurry.

I imagined myself or any other woman in Akin’s wife’s position, what would another woman do?

“If I walk into my husband in bed with another woman, I wouldn’t do anything but I would want to know why he would be cheating on me. For a man to cheat on his wife something must be wrong somewhere.”- Funmilola

“One can hardly trust any man, so the best thing is for a woman to keep praying for her husband and commit him into the hands of God if not the wife will kill herself with hypertension from worrying over her husband’s infidelity. But if I walk into him, it will be very difficult for me to trust him again; it can even make me look for a boyfriend too.”- Goodness

“All men cheat except that they do it in different styles. It is not until the man sleeps with a woman that makes him do it. Some men can use their eyes to strip a woman naked. I have worked in an office where a particular man is fond of touching ladies’ breasts and buttocks by mistake. Some ladies laughed at it but I found it very disgusting. If I find my husband looking at a woman lustfully, I will tell him at that instance and make him know I will not tolerate it. I wouldn’t wait for him to take the woman to bed, at least I would have noticed some signs that he is seeing someone.”- Chioma

“I believe that men who cheat do so because they do not get all-round satisfaction from their wives. It’s not just about cooking delicious meals and looking good. A woman must also know how to perform her duties very well behind the door. She should do it in such a way that the man will never go to another woman even if he is offered. I do mine well enough and I don’t expect my husband to go out but if happens I will be very disappointed and may even leave the marriage.”- Tare

“Are there still faithful men? Are there still married men who don’t have girlfriends? Even pastors. Anyway, if I find my husband doing that I will pay him back in his own coin! I will just look for one rich handsome guy to be taking care of me. In that way the equation is balanced.”- Cecilia

“It’s only an insensitive woman that would not know when her husband is having an affair because something about the way he used to treat her will change. I have never thought about this and I don’t expect my husband to do that. I will be too heartbroken that I can either kill him or kill myself and I will teach the lady a lesson she will never forget in her life. I can’t stand another woman sharing my husband.”-Mrs. Ade-oye

“For a man to lust after other women could be demonic. The other women could be manipulating him because I don’t see a reason why a man who has pledged his body to his wife will go and give it to another woman. The only thing I will do is pray for him and probably get friends to pray too and talk to him.”-Mrs Peters

“My wife is God-fearing, she can never do that. Infact I won’t even think of that. That is a very wicked act and she loves me too much to be wicked to me.”Festus

“I do not pray such happens to us, even if she cheats I will prefer not to find out but if I do, that will mean the end of the marriage. It will be a shameful thing to remain married to an adulterer.”Vincent